​North America on the Eve of European Invasion

Before contact with Europeans, indigenous people inhabited every part of North America, or Turtle Island, going back at least 20,000 years. Numerous cultures and civilizations existed throughout that time period and scholars estimate that the population totaled more than 60 million prior to European contact in 1492. Disease, war and famine brought by Europeans killed more than 50 million indigenous people by 1600. Today, in what is now known as the United States, there are 574 federally recognized tribal nations and approximately 175 indigenous languages still being spoken.

The Middle Passage was forced voyage of enslaved Africans across the Atlantic Ocean to the New World. It was one leg of the triangular trade route that took manufactured goods (such as knives, guns, ammunition, cotton cloth, & tools) from Europe to Africa, enslaved Africans to the Americas and West Indies, and finally, raw materials and resources (sugar, rice, tobacco, indigo, rum, & cotton) back to Europe. From the end of the 15th century to the mid-19th century, an estimated 12 million African men, women and children were forcibly taken on the 21-90 day journey across the Atlantic Ocean aboard grossly overcrowded sailing ships manned by crews mostly from Great Britain, the Netherlands, Portugal, and France.

Watch the video to learn about what their experience was like and download the readings for more information. 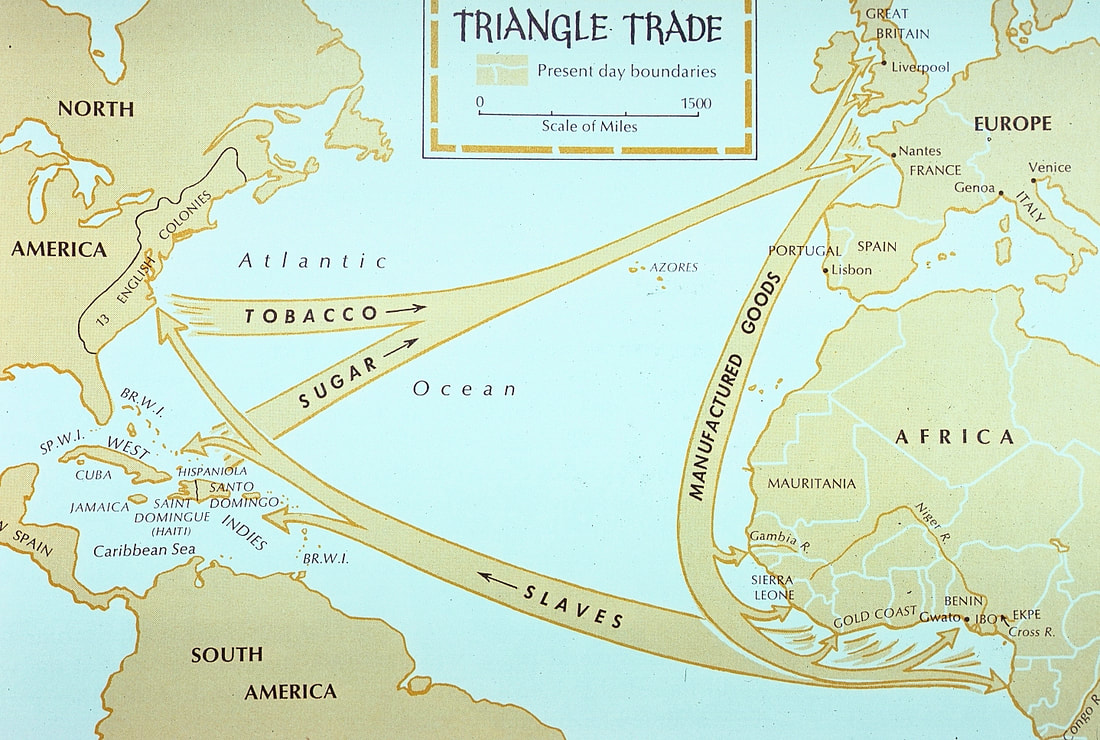 In 1803, President Thomas Jefferson bought about 828,000 square miles of territory from France for $15 million, or approximately four cents an acre. This deal more than doubled the size of the United States, and 15 states were eventually created out of this territory which stretched from the Mississippi River in the east to the Rocky Mountains in the west and from the Gulf of Mexico in the south to the Canadian border in the north.

After the Louisiana Purchase, Jefferson commissioned Meriwether Lewis and William Clark to explore and map the new territory, to find a practical route across the western half of the continent, and to establish an American presence in this territory before European powers attempted to establish claims in the region. Lewis and Clark's secondary objectives were scientific and economic: to study the area's plants, animal life, and geography, and to establish trade with local Native American tribes. Discover more about the Lewis and Clark Expedition on this interactive map.
Read more about the history of the Louisiana Purchase and a primary source message from Thomas Jefferson to Lewis and Clark. Answer the practice GED questions for more practice.

The Trail of Tears 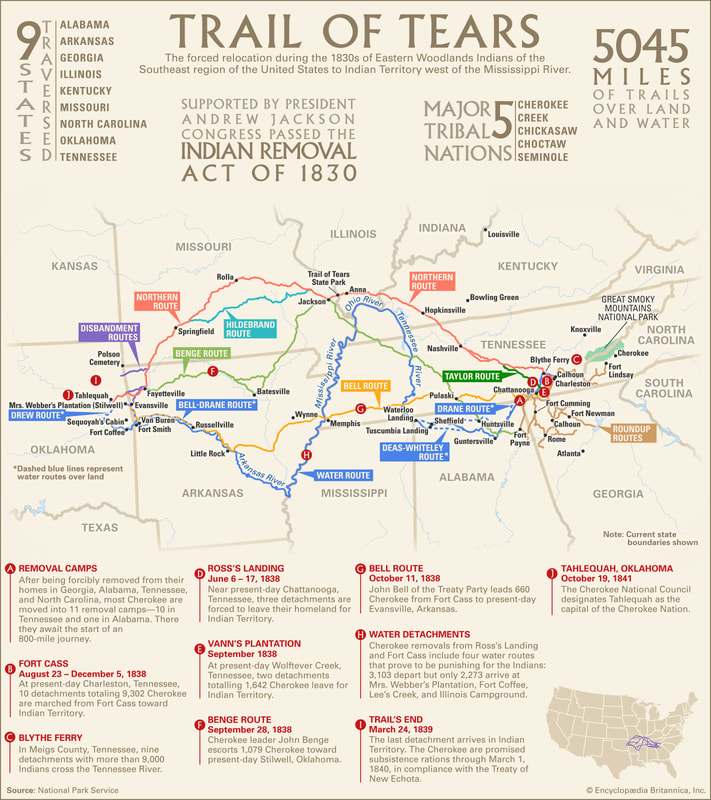 From 1830 to 1850, an estimated 100,000 Native Americans (primarily members of the Cherokee, Muscogee, Seminole, Chickasaw, and Choctaw nations) were forcibly removed from their ancestral homelands to areas west of the Mississippi River. These forced relocations were carried out by the US Government after the passage of the Indian Removal Act of 1830. The indigenous peoples suffered from exposure, disease, and starvation while on their way to their newly designated reservations. Thousands died before reaching their destinations or shortly after from disease.
The Trail of Tears was one part of these forced relocations, and the name comes from what the Cherokee called the event: nu na da ul tsun yi ("the place where they cried") or nu na hi du na tlo hi lu i (the trail where they cried). Up to 6,000 out of 15,000 Cherokee died on their march to what is now present-day Oklahoma. ​
​For more information, look at this interactive map that shows the US Government's invasion of indigenous land.

In January of 1846, President James K. Polk sent American troops into Texas to provoke Mexico into war. Polk was an expansionist and a believer in manifest destiny, the idea that Americans were predestined to occupy the entire North American continent. When Mexican troops fired on American troops on April 25, 1846, Polk used that as an excuse to start the Mexican-American War.
​The Treaty of Guadalupe Hidalgo, which you can read in the link above, was signed in 1848, and it granted enormous territory to the United States, including present-day California, Nevada, Utah, Texas, and parts of Arizona, New Mexico, Oklahoma, Colorado and Wyoming. The question over whether slavery would spread to these new territories sparked more conflict in the U.S. and would drive the North and South even further apart. ​

Practice your map reading skills with this GED practice test!